Thank you for your patience while we retrieve your images.

THE MONETARY SYSTEM
The creation of the Bretton Woods agreement (1944), after the conclusion of World War II, was to regulate the international commercial and financial order, to avoid harmful practices to world prosperity.

But like a wolf in sheep’s clothing, the resulting - insidiously manifested organisations like the World Bank and the IMF, in collaboration with the Bank for International Settlements, United Nations and its derivatives, major think-tanks, foundations, international banks and the worlds ‘Superpowers’, have instead - tightened the noose of financial and global dictatorship over all countries.

Ever since the days of Jesus, money lenders were despised and kicked out of church grounds. Islam prohibits the use of usury – charging a fee for the use of money. Today, the banking system deeply enslaves us into serving the ‘God of Money’ and ‘The Elite Agenda’. Religions have been hijacked and watered down to dogmatic rituals to hide true spirituality.

Money was originally created to universally reward labour for goods and services. However - today, the pursuit of money for profit is - a colossal disconnect - with a caring society. The ‘Priority of Profit’ or ‘Economic Growth’ - the indicator of prosperity - represents a gaming mentality with ‘no rules’. Think - environmental pollution, food, labour and healthcare exploitation, geopolitical wars, exotic financial instruments, financial manipulation, planned obsolescence of goods… As a consequence, human concerns are always second to monetary gains.

To maintain its integrity, the monetary system requires a few key concepts to be continually perpetuated, else it falls apart. These concepts unsurprisingly influence human behaviour negatively, distort our worldviews and amplify fear in the way we live life.

It is difficult to deny, that the monetary system’s key concepts – make a self-centered society. However, it is tolerated and in some cases worshipped in the name of survival, competition and prosperity.

Cyclical consumption – is the flow of money, induced by consumerism and planned obsolescence of goods and services. This leads to multiplicity of goods, resource waste, pollution and non-sustainable practices.

Perpetuation of scarcity – is a fear, being continuously created and amplified. So we have to fight with each other in order to survive. It is profitable for industry leaders to keep resources scarce. Scarcity sustains poverty, war and class stratification.

Priority of profit – is a sickness that encourages distasteful ‘self-interest’ in human behaviour. It is a corrupt and false incentive, extracting wealth from society, in any way possible. Majority of crimes are motivated by money. It creates the duality of us against them and constantly puts us at war with each other.

Distortion of values – is manipulation of consumer preference via the media and social groups - by re-associating true identity to a ‘promoted ideal’. Psychologically, it reinforces greed, jealousy and ego. It promotes material wealth, social hierarchy and social tension and rewards competitive behaviour.

Fiscal and Monetary Manipulation – are tools to regulate and jump start economic growth. Growth occurs when money supply (debt) increases, until the Ponzi scheme collapses. The concept of ‘interest ‘, perpetuates class stratification by stealing from the poor to give to the rich. Over time, debt overpowers and nullifies growth expansion. The main benefactors of government spending are elite owned corporations.

Debt Slavery – is a how the economy grows. Money is created out of debt. A bank loan creates money into existence, but the interest portion is never created – so there is never enough money in the system to pay back all debt. Scarcity of money supply (controlled by central banks) influences the behaviour of society. Debt is also a very active tool for social control. Debts keep humans working and maintaining subordination to authority.

My series of photo art portrays the monetary system as a game of cards - equal opportunity – a game of chance - a game of skill – a game of ego, but unknown to many, it is also a Ponzi scheme, rigged from the inside by the elites of the world.

This series also expresses some of the key monetary concepts presented above and implies the idea that we are all enslaved in ‘illusion’ - a very well programmed matrix, where few at the top rule the many at the bottom via a main protagonist - the monetary system. 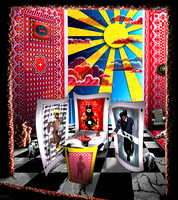 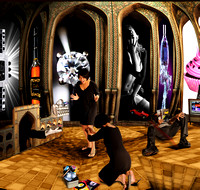